The Tao of the Dragon 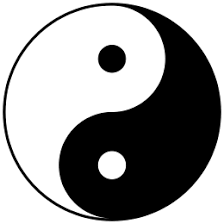 In the Tao of the Dragon, all living things express the duality of the Yin / Yang principle of balance and harmony in the universe. The existence of one state of being reflects the presence of the polar opposite condition within the same space and time.

So it is with colour, if you sit outside on a bright sunny day surrounded by green foliage and close your eyes, your eyes register the creative energy of Red that emanates from the life-force. We have all experienced this polarity at times when we have focused our attention on an object of a strong colour and when we look away the image of the polar opposite colour remains in our vision.

We know this happens from science that the reflected light that we see is the polar opposite of the absorbed light of the object. So the colour of an object is actually its polar opposite. Green leaves emanate green light but their absorbed colour is red.

And so, an event that occurs that initially appears negative is actually positive when we look at it from a different perspective.

This is the Tao of the Dragon!

The colour red has always been connected to magic and force. The red colour belongs to blood, heat and the pulse. In Norse tradition, magical objects were loaded with energy by colouring it red, often with blood. Words like the German Zauber or the English sorcery come from the old Norse word teufer which means “to colour red“. Red is the colour of the life-force that is absorbed by all living things in the natural world.

This axis of colour is linked to the physical realm through its primary connection of red and its secondary colour of green.

Red is the colour of the Base Chakra, and so it relates to the sexual energy of pro-creation, of desire, vitality and strength.

Being able to control this energy is the lesson of Red. To channel this life-giving force into a creative, and hence destructive, direction and not to be afraid of failing is the lesson to be learned.

The colour blue is commonly representative of the act of thinking. The blue colour belongs to water, coolness and the vastness of the sky. Both the sea and the sky are symbolic of vastness, infinity, and the experience beyond the grasp of the human condition, both the ultimate and the eternal. Since blue is tied in with oceanic and celestial symbolism, blue also symbolizes wide, open space and primordial emptiness. Much like the realm of thought which is limitless in its expansiveness.

This axis of colour is linked to the mental realm through its primary connection of blue and its secondary colour of orange.

Blue is the colour of the Throat Chakra and so it relates to the act of expression of ideas, thoughts and feelings. For this is how they become manifest in the world.

Being able to express our self-awareness is the lesson of Blue. As our ideas, thoughts and feelings determine how we manifest things in our life, our voice assists us to create our reality. To use our voice to create and not to be afraid of expressing our feelings is the lesson to be learned.

This axis of colour is linked to the spiritual realm through the primary connection of yellow and its secondary colour of purple or violet.

Yellow is the colour of the Solar Plexus Chakra and so relates to the power centre of the body. From this centre, we exercise our will into the universe to manifest what we desire. It is the seat of personal power.

Being able to exercise our personal power is the lesson of Yellow. Power comes from knowledge properly applied. To use our knowledge to create a personal experience without fear of involvement or committment is the lesson to be learned.

The colour purple is a mixture of red and blue primary colours that falls at the polar opposite of yellow. As such it is commonly representative of the divine connection with the higher self or universal consciousness. In many traditions, purple has been linked to a connection with God, the Divine Consciousness or Universal Mind.

Purple is the colour of the Crown Chakra and so relates to the Christ Consciousness, Higher Self  and connection with a higher power.

In psychology, the colour purple is uplifting, calming and stimulates creativity.

Being able to exercise wisdom in the application of personal power is the lesson of Purple. To understand how spiritual energy flows through you as it branches out into the world and not be afraid of the unknown is the lesson to be learned.

The colour green is a mixture of blue and yellow primary colours that falls at the polar opposite of red. As such it represents the abundance of life brought into existence by the life-force. In many traditions, green has had important implications with fertility and rebirth. For its connection with plant life, green has strong associations with growth, awakenings, and abundance. Prominent in the springtime, green symbolizes hope in immortality, of things beyond the cyclical seasons. Green envelops the negative aspects of newness, such as naivety, immaturity, and inexperience, even unripe foods.

Green is the colour of the Heart Chakra and so relates to the feeling and expression of love and nurturing.

In Psychology, green is regarded as being soothing, relaxing mentally and physically, helps with depression, anxiety and nervousness.

Being able to use discipline with the expression of this energy is the lesson of Green. To regulate how this living energy flows through you as it branches out into the world and not to be afraid of our responsibility is the lesson to be learned.

The colour orange is a mixture of red and yellow primary colours thats falls at the polar opposite of blue. As such it respresents the abundance of life and the rational intelligence. In many traditions, orange is the colour of thoughtful action. In psychology it is an energising and stimulating colour.

Orange is the colour of the Hara Chakra and so relates to the centre of physical and emotional balance.

Being able to act with courage within this energy is the lesson of Orange. To commit to the relationship with yourself and not be afraid to face the truth is the lesson to be learned.

The colour magenta is a mixture of red as a primary colour and purple as a secondary colour that falls at the polar opposite of lime. As such it has the abundance of life-force and the influence of the divine consciousness. There is much debate over what the actual colour looks like, from a purplish pink to a rich burgundy colour.

Magenta is the colour which filters or regulates the flow of information we perceive consciously from the spirit realm and so excesses or deficiencies in this colour tend to impact in the psychotic disorders where the perception of reality can be impacted.

The colour russet is a mixture of red as a primary colour and orange as a secondary colour that falls at the polar opposite of turquoise. As such it has the abundance of life-force and is an activating force. It is a reddish orange colour.

Russet is the colour which produces results and carries the master vibrations with the ability to work on the physical and mental realms helping to focus thinking.

The colour amber is a mixture of yellow as the primary colour and orange as the secondary colour that falls at the polar opposite of indigo. As such it has the intelligence or knowledge and is an activating force. It is a yellowey orange colour.

Amber is the colour which is often used to protect the consciousness when communicating with spirit by keeping you grounded and carries the master vibrations with the ability to operate in the mental and spirit realms helping to ‘keep it real’.

The colour lime is a mixture of yellow as the primary colour and green as the secondary colour that falls at the polar opposite of magenta. As such it has the intelligence or knowledge and the discipline to apply it. it is a yellowey green colour.

Lime is the colour which is often used as a cleansing agent on all levels and carries the master vibrations with the ability to operate in the physical and spirit realms clearing the way for advancement.

The colour turquoise is a mixture of blue as the primary colour and green as the secondary colour that falls at the polar opposite of russet. As such it has the expansiveness of thought and the discipline to control it. It is a bluey green colour.

Turquoise is the colour often used to grant authority to act and carries the master vibration with the ability to activate processes within the physical and mental realms creating opportunity.

The colour indigo is a mixture of blue as the primary colour and violet or purple as the secondary colour that falls at the polar opposite of amber. As such it has the expansiveness of thought and the influence of the divine consciousness. It is a purplish blue colour and is also the subject of much debate as to its exact colour.

Indigo is the colour often associated with divinely inspired thinking and spiritual vision. Excessive or deficient presence of indigo can result in perfectionism or scattering of thinking in the neurotic mental conditions. 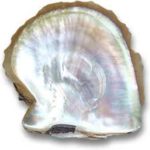 The colour pearl is a difficult colour to show here because it really has no equivalent in the colour spectrum. It is a gem produced through the irritation of a grain of sand in an oyster shell. However when you see a pearl you can often see all colours contained within it, much like an opal. The Mother of Pearl shell also gives a similar colouring as shown in the image to the right.

I use pearl to represent the experience we gain throughout life because it contains all colours as does the shade white. White emanates all light and absorbs nothing so it appears black in its polar opposite. The pearl gives off a rainbow effect and in a way represents white/black.

Pearls are also one of the treasures closely guarded by dragons and represent the ‘Pearls of Wisdom’ we all seek in our journey through life. The dragon does not give up his pearls easily and we must work to gain his favour to release them for us.

The Colours in summary