Our Brain as an Organ of Sense

Our brain is the physical body’s central processing unit (CPU) for the processing of information coming to it through the mechanism of nerve conduction and chemical reactions. As such, it has the capacity to regulate how the physical body reacts to the environmental stimulus.

It operates under one of the universal laws of nature, that being the law of balance and homeostasis. This law states that homeostasis is the natural state of equilibrium that must be maintained in order to sustain life. Wikipedia gives a good description of the homeostatic systems of the physical body controlled by the different feedback mechanisms. 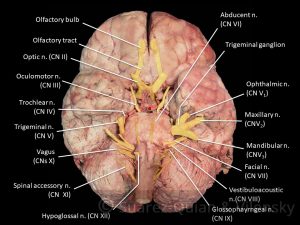 The Cranial Nerves are one of the mechanisms by which this information is transported to and from the brain. There are 12 cranial nerves, 2 originating from within the cranium and the remaining 10 from within the spinal column. The names give a hint to what their function is. In Chinese Medicine, these nerves are also supported by channels of energy flow from within the body connected to major organs. However, Traditional Chinese Medicine recognises functions rather than physical structures to guide diagnosis and treatment.

We can experience a sense of a state of equilibrium or disharmony depending on what is happening in the body. This state is often referred to as the mind’s sense of well-being and can influence or be influenced by the mental senses.

In western science, these mental senses are recognised in psychology as the senses of;

Although psychology may not refer to them as a sense but rather a system of information processing. Western science comes from a viewpoint that the brain’s physical structure and chemical interactions control thought content, the ability to perceive, memory retention and retrieval, and what motivates us to act.

However, western science is unable to explain how the mind can change the physical structure. How when we feel happy we release endorphines into the brain’s chemistry or can regulate the production of seratonin during deep meditation thereby relaxing the body at will. They are also at a loss to explain what they call ‘idiopathic cures’. An ‘idiopathic disease’ is a disease that has no discernible cause or cannot be explained with the current level of understanding of science.

Another term used to negate unexpected results is referred to as the ‘placebo effect’. The Placebo Effect occurs during scientific research where a person who is receiving a false treatment experiences a cure of their condition. They are not receiving a therapeutic dose of any medication but believe that they are. The cure rate can be as high as 30%. This group is removed from the results because the ‘cure’ is not related to treatment and cannot be explained by conventional methods.

Our mental senses can be influenced by our environment and can influence our environment. There are many thought leaders who promote the idea that you can change your reality by changing the way you think!

The mind is a processor of information, much like a computer program, and our mental abilities are the features of the program that allow us to perform tasks within the program. Like a hard disk, the brain stores information in a systematic way to allow for information retrieval when required. The conscious and unconscious mind uses the stored information to complete tasks.

The quality of the stored information affects the outcome. We had a saying in computerised payroll when it was first introduced, “Bullshit in, bullshit out!” If you save the wrong information onto the hard-drive then you will get the wrong answer come out when the program runs.

Our minds software program cannot determine what is ‘good’ or ‘bad’ information, it just processes what is stored.

Perception is the key

How we perceive the world around us, and what happens to us, determines what information is stored in the brain. We interpret events, categorise it, place value judgements deciding what is ‘good’ and ‘bad’, then file it away. Our interpretation of current events is determined by our experiences of past events. Through this reinforcement of perception and interpretation we develop a world view that is usually ‘positive’ and supportive or ‘negative’ and destructive. Each new event is then perceived and interpreted through a filter of past experiences.

Our spirit, which carries the programming of our personality, is the result of knowledge gained from each lifetime of experiences. Each of our incarnations has slowly built up a body of knowledge that travels with us from incarnation to incarnation. This program of personality has the ability to alter its software and perform ‘updates’ with each new insight gained. The insights reinforce or contradict our world-view and we change our programming accordingly.

The way we perceive the world and interpret events determines the quality of the information stored in the brain.

The components of mind and mental processes according to western psychology are; Rationality, Perception, Memory, Motivation, Responsibility and Imagination. We have just dealt with perception and memory as ways the mind interprets events from the internal and external world. These are processes that assist with our interface with internal and external events.

The senses of ‘responsibility’ and ‘motivation’ are spiritual in nature and are dealt with in the page on Spiritual Senses. So we are left with the core elements of mind programming: Rational Thought and Imagination.

According to modern science, our seat of rationality is in the left brain. This is the place where thoughts, both logical and illogical, are processed and we decide whether they make sense of our interpretations or create confusion. This is where we test knowledge and, hopefully, arrive at wisdom.

The Cambridge English Dictionary defines ‘rationality’ as “being based on clear thought and reason, or of making decisions based on clear thought and reason.” The Greek philosopher Plato referred to the ability to ‘reason’ as the ‘natural monarch’ of all the elements of the human soul. The ability to discern logical from illogical helps us when making decisions in solving problems of daily living. We use reasoning to ‘sort the wheat from the chaff’, to determine what is relevant or irrelevant to a problem and its potential solution.

It is here that disorders of thought and reasoning arise and is interpreted as a ‘mental illness’ and diagnosed with a ‘schizophrenia’ type condition as the personality disintegrates, their perception of reality becomes distorted, and the ‘patient’ begins to no longer be able to function in the world. The disintegration of personality and perception may be necessary so that the person can learn to reintegrate their personality and become a newer and better version of themselves, with the right guidance.

According to modern science, our seat of imagination is in the right brain. This is the place where ideas and concepts are tested for validity and application to our inner and outer worlds. This is where we test reality and is the doorway to the ethereal.

The Cambridge English Dictionary defines ‘imagination’ as “the ability to form pictures in the mind.” It is our ability to form pictures in our minds that assists us to solve problems as we visualise how the solution will look and feel. For people with very strong imaginations the imagined object can appear incredibly realistic to the point where the object can almost ‘be seen’ with the physical eyes.

Like the yin/yang symbol of Eastern Philosophy, these two senses are in a constant dance around each other. Both are essential for a healthy mind.

The Cambridge English Dictionary defines the ‘mind’ as being “the part of a person that makes it possible for him or her to think, feel emotions, and understand things” that happen to them. It is our mind that interacts with our environment and helps us understand the universe in which we live.

According to Thomas Szasz in his book “The Soul Doctors” he says that in the original German language that Freud wrote in, he did not use the word for mind, ‘Verstand’ or consciousness, ‘Bewusstsein’. Instead the word he used was ‘Geist’ which literally translated means ‘spirit’. Another word he used was ‘Seele’ which means ‘soul’. Szasz has some other interesting observations in this book on the origins of psychoanalysis and its role in psychiatry and mental health.

This outline as described here is not reality. It is my minds interpretation of what I perceive as the nature of the mind and consciousness. The reality is that the mind cannot be so easily divided up and categorised for analysis. Our body, mind and spirit are one integrated unit of an individual soul experiencing the physical world.

Every person is an expression of the divine being travelling in unfamiliar territory!

Our purpose is to learn from our experiences in the physical world.

In regards to defining ‘Mental Health’, I define it as the ability to solve problems encountered in daily life and the ability to continue functioning as a valuable member of society. Our mental senses of ‘Rationality’ and ‘Imagination’ are vital components of healthy mental functioning.